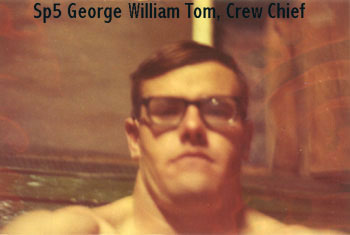 SP4 George William Tom 1970, he was flying a combat aviation mission with Robert Wayne Gardner when their aircraft, UH-1H 66-00870 was shot down near Pleiku, South Vietnam. WO Gardner and SP5 George William Tom, the crew chief, were lost in the same incident.


Specialist Four Gary Fields was flying as the Gunner, and when he realized that the helicopter was going to crash, he jumped from the aircraft and fell approximately 200 feet, landing in a rice paddy. Gary suffered multiple injuries as a result of the fall, and until his Death in October 2006, he was disabled. Gary, the only survivor, was recovered from the rice paddy by the crew of an observation helicopter from the 1st Cavalry Division. Gary remained in a coma for the first four months of his recovery. When he come to, he fell in love with, and married his nurse, and she was his nurse for life

I will never forget these men. Stan Miller was my fiancé and I just recently helped a high school student do a beautiful video on his life. Westlake High School in Houston has each AP student choose a name on the Wall and research their story. So incredibly wonderful that these kids know the stories and sacrifices of these amazing young men. Stan was SO proud to be in the 281st Rat Pack and I was so proud of him.
All the members of the 281st are in my heart and it was SUCH an honor to meet a lot of you in Washington last year...
Hugs & Blessings,
Mary Beth Keith
PS - I’ve included the link to the video below.

A MAN IS NOT DEAD UNTIL HE IS FORGOTTEN